About a month or so ago I had a conversation with a VP from Goldman Sachs. We talked about work hours versus compensation in the investment banking world. We also talked about how he was seriously considering leaving the banking world to pursue an entrepreneurial endeavor. The conversation could pretty much be summed up by this graph: 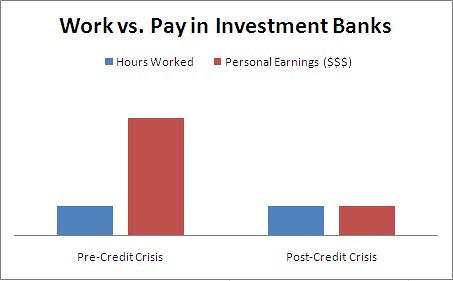 Until recently, many undergrad and graduate students had one career and one purpose in mind: Work for an investment bank – make a ton of money (most of which came from big bonuses).

Today, those huge bonuses are gone yet some people are sticking around these jobs thinking that one day the tide will turn and the bonuses will be back. Part of me believes this is true, that history repeats itself, and one day big paydays will be back (it’s only a matter of time before someone else exploits a flaw in the open markets).

But the other part of me thinks that this will not happen for a very, very long time.

I recently asked my cousin David Wise, who works as a compensation consultant, what his thoughts were on the big bonus payouts. In short, he made a few really good points:

David’s take on compensation below in a recent CBS news interview: