We used to live in what I will call a Media Dictatorship. A Media Dictatorship is a world where content is created by a few dictators (media companies), and as a result, those few dictators are able to charge a premium to advertisers for access to the eyeballs and ears of the people watching that premium content. This process is called television, radio, print, magazines, and newspapers. Think about the Super Bowl and Super Bowl commercials for a second. One night a year, content providers or dictators (the cable network hosting the Super Bowl) know that they will have an entire country watching their show, and as a result, they are able to charge a fortune to advertisers for a 30 second commercial. According to the Associated Press, a 30 second spot for the 2008 Super Bowl was $2.7M dollars. On this night, everyone knows that millions of eyeballs and ears will be tuned in, and so, advertisers are willing to shell out some big bucks for the opportunity to reach all of those viewers (according to a Nielsen report, there were 97.5M viewers of the 2008 Super Bowl). In this world, the world of a Media Dictatorship, the dictators own the distribution of the content, and therefore they own your attention.

Today we live in a very different world. A world that I will call a Media Democracy. A Media Democracy is a world where content is created by anyone, and as a result, those people are able to charge whatever they would like. However in this world, in this Media Democracy, the people that own the distribution do not force their content on the people (see Google). These distribution owners let the people choose what they watch or listen to and as a result, attention isn’t owned but earned. In order to accrue lots of eyeballs and ears, the content must be compelling and the people must be willing to share. And unless there are lots of eyeballs, it is very difficult for the people to charge advertisers anything at all. Consider that YouTube video that you loved, but only has about 100 views. Although the content may be awesome, 100 views is of little significance to big brand advertisers. Now consider that YouTube video that your friend told you about. The video that you would of never heard of had that friend not said anything to you. Turns out, this video has 100M views. Guess who made money off of this video? No one. There was no $2.7M commercial for 30 seconds. The video itself was only 55 seconds, and yet for 55 seconds, this video had the attention of almost 100M viewers.  This was a mini Super Bowl event that happened organically, grew virally, and was controlled by no one. A true democracy.

Welcome to the new age of the internet. Open, distributed, democratized. More specifically, welcome to YouTube. At any given point in time a video could experience a Super Bowl-like event or what I rather refer to as a Black Swan event.

There has been a lot of talk recently on how to make money from YouTube videos or User Generated Content (UGC) videos, especially after seeing YouTube’s inability to make money off of the recent pop sensation Susan Boyle.

As Simon Cowell might say, this story is utterly disappointing and self-indulgent. But the fact that YouTube and ITV have been unable to monetize the Internet sensation that is Susan Boyle is a rather significant blunder, and highlights some of the archaic ways that business is still done between old and new media. – Mashable, Susan Boyle Video Profits: $0

In the Media Dictatorship, media companies know with good certainty how many viewers they have. In the Media Democracy world, no one knows with any certainty how many viewers there will be. In lies the monetization and advertising dilemma with UGC videos or anything viral online. How do you make money off of videos that MIGHT be huge successes? How could an advertiser possibly know what videos are going to be a hit and go “viral”?

So now what? We know there is a ton of potential in videos that have millions of views, but the question still remains:

In a broad sense: How can advertisers capitalize on media that goes viral?
Solution: Selling dynamic advertising access based on first order traffic derivatives.

In a specific sense: How can advertisers capitalize on viral YouTube videos?
Solution: Selling dynamic advertising in YouTube videos based on the growth rates of video views.

Imagine for a second that an advertiser has the ability to place an advertisement (overlay, video ad, pop up, etc) in a YouTube video at any given point in time during the life of that video. For all intents and purposes, an advertiser can throw an ad in a video, however they want, whenever they want.

The answer is no in both examples.

The real solution here is to place that $3M on videos that:

By inserting advertisements into videos that are experiencing the highest growth rates, marketers could benefit from the “viral” effect of videos. The $3M would only be spent as the video increases in popularity. The video will no longer be judged based on “top rated” or “most viewed”, but instead, will be judged and purchased by marketers based on “most growth” (The interface might look something like the image below).

Ultimately, if marketers are to capitalize on the “viral” effect they must start to look at the viral aspects of media or videos, and buy them according to their growth or “viral” potential as the growth is happening. 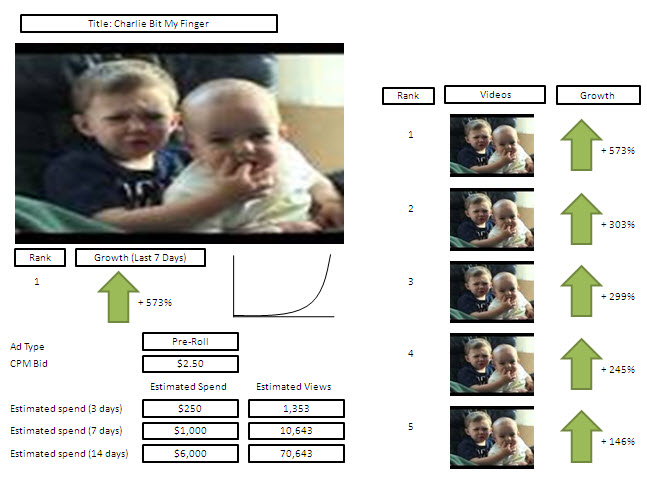