Well, not really. But this guy did.

I’ve been playing poker for quite some time now and what I used to consider a “gambling” game, I now consider a game of math, game theory, strategic thinking, science, risk assessment, and money management. I’m not the only one. In fact, there is an entire society called the Global Poker Strategic Thinking Society that was founded on this very theory.

Jesse Linker, who is one of my good friends and is someone I have known for a very long time,  has been playing online poker as a full time job for the past 2 years. The fact that he has been playing poker full time is not what is amazing. What’s amazing is, if you look at his earnings over time (see image below), you’d notice a steady increase. No real losses. All consistent earnings. Key word here being: consistent.

In shedding some more light on this topic, Jesse agreed to share some of his secrets below by answering some questions. He is also the first person to be featured in a new series of posts called “Student Profiles.” These posts will profile individuals who are consistently looking to learn and get better at what they do. Jesse no doubt fills that profile.

Student Bio – Jesse Linker
Jesse Linker is currently 24 years old and graduated from the from University of Maryland in January of 2009 with a degree in Finance. Since graduating, Jesse has been playing poker professionally. He has tentative plans of attending law school and if asked, he would say his biggest accomplishment is being from the same hometown as The Situation (Manalapan, NJ.)

Dan Reich: How long have you been playing poker for?
Jesse Linker: I’m not exactly sure when I first started, but it was somewhere around 13 or so. I first played online when I deposited $50 into an online poker account almost exactly on my 18th birthday. One of my other good friends made close to $1500 in one night, which he used to pay for spring break. I remember thinking how incredible it would be to play a game that paid so well, and was hooked.

DR: How many hours per week do you play?
JL: It varies a lot, but on average it’s probably close to 35 hours a week of actually playing.

DR: Do you consider poker to be “gambling?” Why or why not?
JL: In the sense that nearly everything you do is “gambling” when your actions do not guarantee an outcome. As the financial recession has shown, there is huge risk inherent to investing. In poker you are immune to a much larger degree of variables, whereas in typical investing, you are exposed to the macroeconomic effects of the global economy and global events. Even taking a job in a large corporation which has traditionally been seen as a “safer” leaves you with little control. I engage in a zero-sum activity, where my income is directly tied into my work ethic and improvement, something that very few other jobs can offer.

DR: Is there a difference between playing poker in person and playing poker online?
JL: There is, but I rarely play in person so I’m not the most qualified to highlight the differences. In general I do not like casinos so I would much rather sit on my couch with a laptop.

DR: How do you minimize risk and maximize income?
JL: After I graduated in January of ’09 I began to exclusively play heads up (1 on 1). I used to play 10-12 tables at once of 6-max tables and would inevitably get sick of that grind and stop playing because I did not enjoy it. In heads up I can play 1-3 tables at a time and I do not burn out to the same degree.

There is so much information available, that it makes it easier to effectively minimize risk while not effecting your income to a large degree. There are websites that track players results, with relatively detailed information. The results are not exact, but they give you a good idea so even before I start playing a person I know the limits they usually play and how they do at those limits. In addition there is software that logs every hand I play on my laptop so I will have information on people I have previously played, which helps.

DR: Do you have a “secret sauce” for showing such steady growth in the amount you’ve made?
JL: I think a lot of people play as high as they can as long as they think they have an edge. It sounds weird but even though I just turned 24, I am old compared to a lot of successful internet players. At 18 or 19 I think it’s easier to take more risks, and I definitely did. Now with most my friends working and the economic recession, I have a greater appreciation for the opportunity that poker affords me. Personally, I have found a good balance where I can make an amount I am satisfied with without taking risks and experiencing downswings I am uncomfortable with.

DR: Do you use analytics tools to monitor your performance? Does it inform the way you play?
JL: Not really, playing heads up allows you to closely pay attention to an opponent’s tendencies and then tailoring a strategy that you think is most effective. I like to have basic information in order to have some ideas on how they play but past that I do not really use any. When playing 10-12 tables this was close to impossible, and your play is more robotic.

DR: Do emotions ever affect the way you play? Have you ever lost money because you were angry or upset?
JL: Of course, and its something that even the most successful players in the world are not immune to. You try to minimize how much it effects you, but pretending that emotions never affect you is probably more detrimental than acknowledging that they always will.

DR: What advice would you give to people that are currently playing, or are thinking about playing poker online?
JL: I think its considerably tougher now than it was a couple years ago to build up a bankroll. There are so many training sites out there such as cardrunners.com that have made it exponentially easier to improve and become competent. I think if you are intelligent enough to start poker today and become successful you are probably better off focusing your energies somewhere else.

For people currently playing I would say the most important piece of advice is to be critical of yourself. There is a lot of information to process, and even when you make the best decisions possible you will often get a negative result. Its easier to blame things out of your control, such as luck rather than realize that even if you were unlucky you should concentrate on your actions and what you can do to improve. In the same vein, when people make a poor decision sometimes they are rewarded and again they are not critical of the actions they control.

This is why poker will always be profitable because it is a flaw universal that people by in large are far too results oriented. An NFL coach who goes for it on a risky fourth down play is largely judged on the outcome of the play, regardless of how correct or incorrect the decision was. Investors are similarly affected with the outcome being the source of criticism or praise rather than the soundness of the decision. Most decisions have a myriad of outcomes that are out of your control and all you can do is make the best one with the available information. Being too concerned with results makes it impossible to best focus on improving your decision-making.

(Snapshot Below: One of Jesse’s online poker profiles) 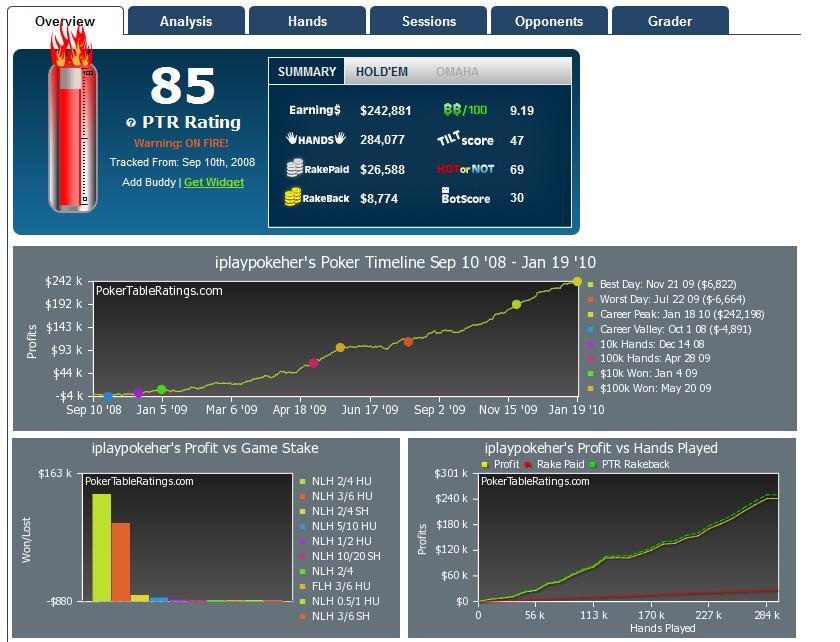