There were at least 30 of them just standing there, listening to the tour guide talk about the room they were about to walk into.

Some of them looked between 60 and 70. Some of them looked much older. All of them however were speaking very heavy German. I’ve been to Germany before but this was a sort of different German. It was the type of old, rustic, 2 generations ago German that I’ve only heard a few times in my life. One time when my grandparents said a few words in the language and another time when I was visiting Frankfurt Germany for the 2006 world cup.

This group was about to walk into the room that I had just left. A room that left me with a sharp pain in my throat and no matter how many times I would go back into this room, I knew that sharp pain would always come back.

These were some of the names of the death camps that Nazi Germany built and used to kill over 6 million Jews, many of which were my relatives. 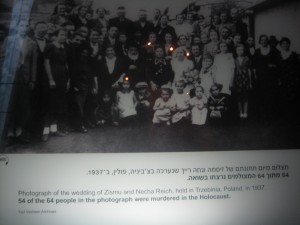 (I don’t know if the picture above are actual relatives of mine, but with the same last name they must have been related to me at some point in time, right?)

The names of these camps were also engraved on the floor of this remembrance hall. It was a special room of Yad Vashem, the Holocaust Museum in Jerusalem, Israel.

As I walk out of this remembrance hall, I can hear the elderly group very softly asking the tour guide questions in German. It was refreshing to see a group like this visiting the museum in hopes of learning more about those horrible years. Inquisitively asking questions. Looking upon their tour guide and consuming every word as if they wanted to imagine what it would be like to actually be there.

They were probably about the same age as my grandparents both of which are holocaust survivors.

And that’s when I stopped to turn around.

Then my brain started to fire off questions..

These questions kept bouncing around in my mind. I walked away and concluded that they were probably just innocent bystanders of the war having little or no involvement.

And that is precisely the moment when I felt the worst. 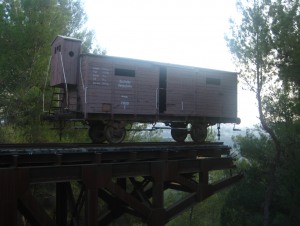 And that brings me to today.

Our world is fucked up. Although we think the world is a better place, which it is, there is still a lot of hate and injustice floating among us. Bullying, antisemitism, racial stereotyping. Even at a lesser degree we see injustice happening in places like work, school, and politics.

And yet many of us including myself sit by and do nothing.

Today we have Facebook, Twitter, blogs (like this one), and it is extremely easy, physically speaking, to take a position and speak out against something you disagree with even if it is only 140 characters long. This is happening all over the world today. It is the cause of new revolutions and uprisings from places like the middle east to places like China. This past week alone we saw a 14 year old girl stand up to Al Queda using her blog.

During the Holocaust there wasn’t an easy way to share information and stand up for something at a large scale. There were many German civilians, and even Jews, that stood by and did nothing.

If we see injustice happening we should use the means around us to take a stand.

Standing up for something today is much better than standing over a memorial tomorrow.