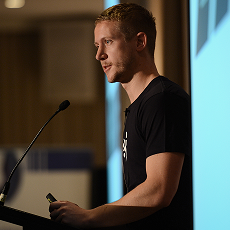 Image by None via CrunchBase

Would you max out three credit cards, spend your life savings, and take on loans from family and friends all for some cool website idea? In January 2008 Alec Lynch did just that and started a freelance marketplace in his garage called DesignCrowd.

Today, Alec and his team announced a new round of financing putting the company’s total fundraising to date at $6.3 million. Back in March, I was able to spend some time with Alec to hear about how he took his small garage-based startup from Sydney Australia and $60,000 in debt, to multiple locations worldwide and $1 million per month in revenue.

Dan Reich: What were you doing before DesignCrowd?
Alec Lynch: I studied Bachelor of Information Technology at the University of Technology, Sydney (UTS).  I loved it and did well academically (I was awarded a $36,000 scholarship and the University Medal).  When I graduated from UTS I was 20 and started my first business with a friend from UTS (Adam Arbolino who studied a Bachelor of Science in IT).  Our business was online CRM software and, while it ultimately failed, we learned a lot of good lessons.  After this, I went to work in strategy consulting at Booz & Co where I worked for 2 years.  While I was there I had the idea for DesignCrowd.  In 2007, a few weeks after scoring a promotion, I quit my job at Booz and moved back home to live with my mum and start DesignCrowd.

Reich: What gave you the idea for DesignCrowd?
Lynch: While I was working in strategy consulting at Booz I was constantly looking at different industries.  I had a personal interest in the design industry, as I’d been building websites since I was 14 and I could see three key problems in the traditional design industry: for small businesses buying design it was 1) slow 2) expensive and 3) risky (you never knew what you were going to get back).  One example that highlighted these problems for me was the release of the London Olympics logo in 2007.  It cost £400,000, took one year to make and was absolutely panned by the public and the media.  I thought to myself  “wow, imagine if they had run a global design contest for £40,000 or even £10,000?”.  I knew they would’ve received thousands of designs and ideas from around the world and saved half a million dollars.  At the same time, I could also see a lot of friends graduating with degrees in creative disciplines but struggling to find work.  Essentially, I could see the dynamic for a marketplace that could disrupt the traditional design industry.

So is Alec and his team disrupting the traditional design industry? According to Techcrunch, “the company currently has over 250,000 registered users in 197 countries, including 100,000 designers and says it recently hit $12 million in design projects through its site, a figure that it expects to exceed $20 million in 2014.”

When I asked Alec back in March what his ultimate goals were, he said “our goal is to pioneer crowdsourcing around the world.”

And with the latest round of financing of another $3 million it looks he is one step closer to that goal. Not bad for someone that maxed out three credit cards and moved back home wit his mum to start some nifty website called DesignCrowd.