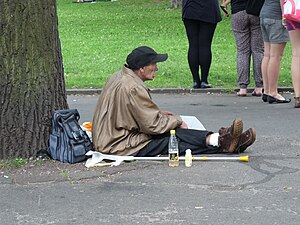 I was sitting on the subway listing to my music and watching three people. The first person pulled out their wallet. The second got up and walked as far away as possible. And the third, standing in between the two, was just hovering there pleading for help.

He had a red moustache and semi long hair. A very shaggy looking dude.

He must have been in his mid twenties, maybe a year or two younger than me. He was wearing a black backpack strapped on tight with a brown sleeping bag interwoven between his arms and shoulder straps. Part of the bag was sticking out like a cape and the other part was dragging beneath his feet. The rain-water on the floor didn’t help either because now part of his sleeping bag was soaking wet.

I looked back at the guy with the wallet. He slowly cracked it open and reached for one of the few bills he had left. I wondered how much money he had in there. As far as I could tell, he didn’t have much either.

He stood up and approached the homeless guy with an outstretched hand.

“Here ya go man.” He handed the homeless person a dollar.

“Thanks bro. Really. Thank you.” It was one of the most sincere thank you’s I’ve seen in some time.

The second person, now on the other end of the subway car, was eagerly waiting to get off. She looked guilty, disgusted and couldn’t wait to leave the train. It was as if she was terrified of spiders and before her stood a giant eight legged creature. I wondered why she was so afraid? Why couldn’t she stand to be in the same company as this homeless person? Or be in the company of the person who was parting with his dollar?

Meanwhile, the guy with the wallet sat back down and chatted it up with his friend.

“The guy just wanted some food. I think it was the right thing to do.”

His friend didn’t even hesitate, “dude, for sure!”

I started to look at the other subway passengers who were nearby. Many of them were now reaching for their wallets and pockets. Some looked happy to help and to join the cause. Others looked hesitant as if almost obligated to match the good deed and righteous donation of the single dollar.

I could hear their inner thoughts. Their body language was speaking loudly.

“If that guy could part with a dollar then I could too.”

The donations continued. Others poured out some singles and coins to this young man who was pleading for some spare change so he could get a meal.

“This stop, 14th street Union Square.” It was the same robotic voice as usual. The train came to a complete halt.  The doors opened and I watched the red-headed homeless person walk off the train. He looked hungry and eager to grab a meal with his newfound income.

I’ve seen this situation many times before especially in the NYC subway system. A person needs help. He asks for it. At first, it seems like no one is willing to help and then there is one. One person that sparks a chain reaction and compels many others to lend a hand. There is of course also the one or two that can’t stand to be around the situation and so they get up and walk away.

This situation reminded me of the countless choices we are faced with every day. We can choose to act or choose to ignore. We can choose to lead or we can choose to follow. The important thing is that we have that choice and that we don’t become desensitized to our ability to act for causes both big and small. We can pursue that big job or promotion or we can remain content with the status quo. We can donate a dollar to someone who is hungry or we can walk away.

Memorial day is over but I’m reminded about how fortunate I am to live in a world and a time where we can make those choices. I’m fortunate for the good people that help make this world a better and safer place.

At that moment my iPod switched songs. Damian Marley and Nas came on…

That I’m safe when I’m resting

Furniture in my nesting

Not by force I’m suggesting

You count your blessings

I think I’ll take a cue from Damian and Nas today and count my blessings.