It wasn’t too long ago that my partners and I found ourselves obsessing over an idea for a product that we’ve always wanted. It would help us be more effective at what we’ve been doing our entire lives: hustling –or in a more traditional sense, “selling.”

In the world of technology that support sales and account management teams, the most commonly used software is a broad category commonly known as Customer Relationship Management (CRM). If you’re not familiar, maybe you’ve heard salespeople at your company complain about having to use it.

It seemed crazy to us that despite the fact that there are now self-driving cars, the advancements in a category that pervades such a large portion of the workforce has largely not evolved in 30 years. We talk about the applications we use in our personal lives as “delightful,” but not the ones we use at work. There had to be a better way to arm organizations and sellers to succeed at their jobs.

In order to imagine the future, sometimes the best place to start is by looking at the past.

In 1977, Oracle launched with the goal of building a relational database. This database needed to be installed on-premise at a specific physical location, and could be managed using a bunch of fields, forms, buttons and boxes. And then Marc Benioff, founder of Salesforce, very astutely realized that this database should live in the cloud and not have to be installed on-site, so that people anywhere could access these same fields and forms whether they were in a hotel room or at the office.

As time went on, our computers became smaller and so software developers all over the world tried to pack a ton of functionality into a little screen by simply making those same field and forms smaller. 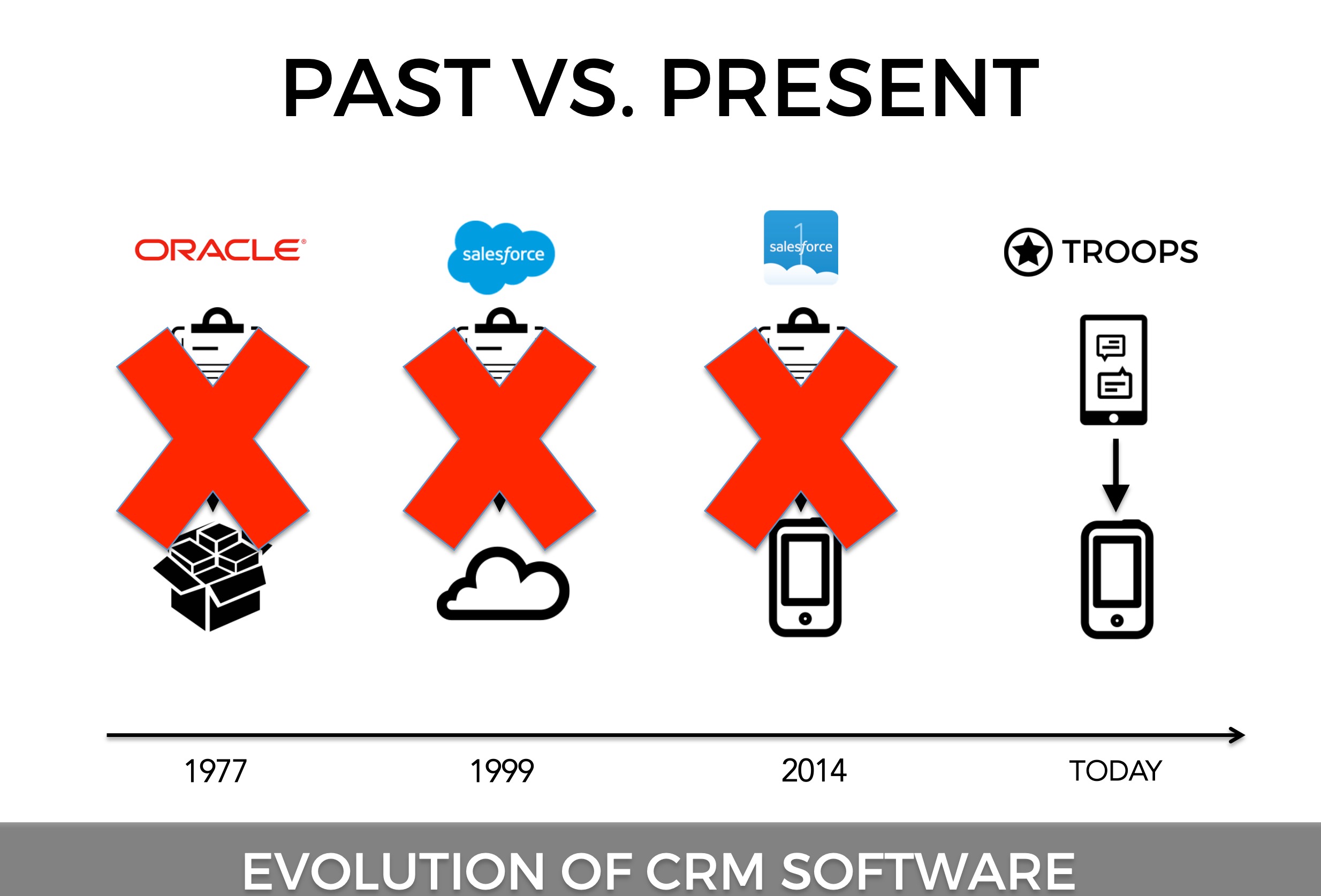 If you ask most people today who rely on this software to do their jobs, they’ll tell you the experience isn’t exactly enjoyable.

To date, enterprise software companies have been trying to get humans to adapt to software, when instead, the software should adapt to humans.

We think this is the wrong approach. Instead these companies should be striving to build solutions that mirror behaviors people already know and enjoy.

That brings us to our mission and what we’ve been quietly building at Troops. Today we’re excited to share more publicly what we’re up to.

At Troops, we fundamentally believe that the future of “getting things done” is going to look a lot less like static fields and forms, and more like a conversation with a human being… an intelligent one for that matter!

Furthermore, we believe that messaging, or conversation, will be the defacto UI for a growing number of software applications. The “bots”or human-like inhabitants of these interfaces will not only be highly responsive to real-time requests, seamlessly cutting out a myriad of clicks, but also be able to intelligently suggest actions based on my process and workflow across all the tools I already use. Everyone already knows how to message. We believe so strongly in messaging and conversational interfaces because these are already behaviors we’re accustomed to in our everyday lives.

Six of the top ten apps in the world are messaging apps, and it’s no surprise that the apps we use for work are looking more and more like the ones we use in our personal lives. Ten years ago, would you expect cat giffy’s to be shared in the workplace? The consumerization of the enterprise has arrived and it’s here to stay.

Whether it’s Slack or Facebook and their new announcements at F8 to make messenger the place where businesses and customers interact, it’s clear to us that messaging is beginning to permeate the work environment in a very different way than we’ve seen before…and we think it’s the first inning of this trend.

“At work, we’re thirsty for data to guide and inform decisions and we bring with us similar expectations of technology’s ability to answer questions instantly. As chat becomes an increasingly important user interface in the workplace, there’s a massive opportunity for startups to enrich conversations with answers to questions that pop-up in Slack and elsewhere.”

So back to Troops and what we are announcing today.

Troops is a Slackbot for sales teams. It makes it easy to use CRM data to do your job — no more trudging through Salesforce. Troops lets you instantly push and pull CRM data in and out of Slack, turning it into the sales hub for both you and your team.

Over time, this Slackbot will evolve and become smarter. It will live on all conversational platforms that are either controlled by text or voice. It will become your artificially intelligent assistant for work — completely agnostic to medium.

We’re starting with the roles and functions we know best: people who interface directly with customers — sales, business development and customer success teams.

We’ve been fortunate enough to work with many leading sales organizations and customer success teams. These teams are trailblazing their respective industries, and we are excited that Troops is playing a small part of their success.

For those of you who are excited about our mission of making it easier to be successful in the workplace, drop us a line. We’d love to hear from you. And if you’re interested in giving Troops a try, sign up for the beta at Troops.AI.

PS. And some press on our launch here – 3 founders spent a year building a Slackbot that makes sales jobs easier, and they raised $2.6 million from a who’s who list of investors