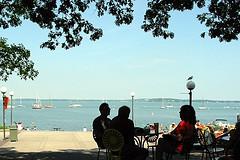 It may seem as if entrepreneurship and venture capital are exclusively tied to the east and west coasts. In many cases this is true. A recent report derived by SSTI from PricewaterhouseCoopers Moneytree Survey Data shows that California attracted 53% of all venture capital dollars in 2012 in the United States followed by Massachusetts and New York City with a combined 19% of  VC investment dollars.

For recent graduates pursuing a career associated with the world of startup life, it may seem as if the coasts are the only places to go to start or join a new business.

There are, however, accelerator programs that are trying to change that. One program that I’m intimately familiar with, given my ties to UW-Madison, is called gener8tor and it is launching its third class of startup companies. The program is based in Madison, Wisconsin and is drawing companies from Austin, Madison, Milwaukee, Chicago, and the Twin cities.

Jon Eckhardt, co-founder of the program sees a big opportunity to create a more meaningful environment for aspiring entrepreneurs in the Midwest.

“gener8tor’s is tightly integrated into the entrepreneurship communities in the mid-west and the coasts, especially as a result of our work with nearby academic institutions” Eckhardt said. “This, combined with our innovative training platform, lets us link the capabilities of the mid-west with resources nationally.”

And it’s starting to work. According to Troy Vosseller, a co-founder of the program, its 13 companies have raised more than $5 million in capital and created 70 jobs. “The growth is only accelerating and this summer the program saw over 250 applications from around the country and from around the world,” said Vosseller. Other VC firms are starting to notice. One of which is Great Oaks Capital, a VC firm who’s founding team spent time studying at UW-Madison.

John Philosophos, Partner at Great Oaks Venture Capital put it this way. “We see big opportunities brewing in the Wisconsin ecosystem.  The entrepreneurial community is growing and producing high quality start-ups. Critical resources, including top flight developers from the UW Computer Science program and College of Engineering, mentorship from the State’s broad based economy and forward thinking corporations are all being mobilized to support innovation in the State.  Accordingly, we have made Wisconsin one of our national areas of focus.”

Local corporations are also joining the movement. American Family Insurance, based in Madison, has begun investing in and becoming customers of the region’s emerging companies. Dan Reed, Director of Business Development at American Family, says the company “sees an opportunity to engage the community in creating wealth and value in a way that also fosters a culture of innovation across the region.”

And it’s no wonder that more focus is being spent on this Midwest ecosystem.

Consider that just a few years ago, the University of Wisconsin was said to have “stood out among its state school peers” in terms of producing chief executive officers of major corporations, according to a study from U.S. News & World Report. If a program like gener8tor could help guide some of that raw Midwestern talent, maybe we’ll see an uptick of investment dollars and economic growth in the Midwest which would be a huge win for the region and national economy.