De Ja Vu. Another trip to the Rose Bowl and another loss by Wisconsin. That’s how 2013 started for me but you can’t win em all, right? 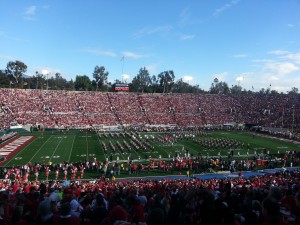 Like all new years, I try to take some time to reflect on the past year. I think it’s a healthy and worthwhile thing to do (Here is last year’s review). It also helps to put things in perspective when thinking about the year ahead. So let’s see how this year went.

I mentioned it earlier but this January started off like last January. Wisconsin lost in the Rose Bowl. Shocking. Last year however I wasn’t in Los Angeles for the game. I think it was because I was looking forward to a much bigger game that would take place the next month.

(Indianapolis – Left to Right: My sister, brother, me.)

February. They did it! The Giants won the 2012 superbowl and it only took me 11 hours to drive across the country to Indianapolis with my father, brother and sister. The game and experience were both incredible. The icing on the cake was the fact that I took the Giant’s to win with 25 to 1 odds. That will probably be the luckiest bet I ever make, but I’ll take it. I also had the chance to meet a lot of great people, performers and athletes but perhaps the most interesting encounter was when I bumped into Flavor Flav at the McDonald’s airport for my 4am flight to California. Yes, he was wearing his giant clock even at 4am. He was also on my flight.

Life is a series of ups and downs and March was one of the tougher months of the year. A family member of mine passed away from congestive heart failure. I’m not sure what else to say about that month other than it sucked.

April was better. In just one month I would be getting married. Even typing the word “married” is still a bit strange but I wouldn’t change it. Aside from the wedding plans, I got to head back to Madison, Wisconsin with Andrew and Corey to talk to some students about our Spinback experience. As one friend put it, “the student becomes the teacher.” I don’t think I would go that far but it was great to share some stories with students.

May is when I married my best friend, Amy. The wedding was incredible and I still need to watch the wedding video. I’ll be sure to do that in 2013. After the wedding we did the honeymoon thing and traveled across the country and to the Pacific: Hawaii. It was my first time there and I’m sure I’ll go back at some point. It was also a major milestone in my life as I finally got to cross off the bucket list. I expected to be terrified jumping out of the plane but it was one of the more peaceful and exhilarating experiences of my life. It’s something I highly recommend that you try. I also got to play golf at some spectacular courses which only reconfirmed how much work my golf game needs. 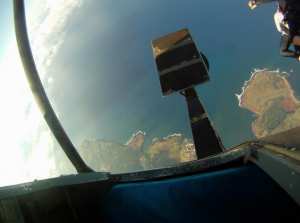 (Amy is already out of the plane)

In June, Buddy Media got acquired by Salesforce.com. It was such an incredible experience to work with Mike and Kass Lazerow as well as the rest of the Buddy Media team. It’s amazing how much you can learn in such a short period of time. The deal was finalized in August and then I took some time off to do some traveling. Amy and I went to Greece, Turkey and Israel, ate some amazing food and did some extraordinary site seeing. If there is one thing I took away from that trip it’s this: Travel more. Life is short and the world is small. I’m pretty sure Australia is next on my list but who knows when I’ll make it there. And now I’m thinking about this quote I recently read.

The World is a book, and those who do not travel read only a page.  ~St. Augustine

Overall, 2012 was a phenomenal year. I learned to be more fearless, more independent and more appreciative of the important things and people in my life. In 2013 I’ll write some new chapters and blog posts. I’ll start a new business venture and keep moving on in this little thing called life.

Here are some random and meaningless predictions for 2013: