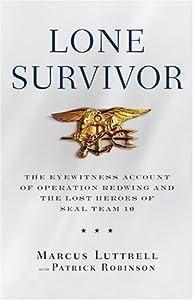 Osama Bin Laden is dead and today I recall the feelings I had on that fateful day in 2001. Although I am admittedly filled with thoughts of joy about how this evil is wiped off the face of the earth, I still cannot seem to shake the sadness that continues to live on with those who lost loved ones over the past 10 years. And although the Seal team executed this operation with surgical movie-like precision, there have been other Seal teams that did not have the same fortune during this extended war against terror.

And it is with this in mind that today I recall the story of Marcus Luttrell, a Navy Seal who was awarded the Navy Cross for his actions against the Taliban during Operation Redwing. During Operation Redwing, Marcus lost his closest friends and was quite literally a Lone Survivor in the mountains of Afghanistan.

From the book description – Lone Survivor:

Four US Navy SEALS departed one clear night in early July 2005 for the mountainous Afghanistan-Pakistan border for a reconnaissance mission. Their task was to document the activity of an al Qaeda leader rumored to be very close to Bin Laden with a small army in a Taliban stronghold. Five days later, only one of those Navy SEALS made it out alive.

This book tells the story of Marcus and his team from SEALs training in Coronado to their military assault in Afghanistan. It details their experience, their brotherly bond, and their ultimate sacrifice that has led us to this day. A day when we can celebrate justice and remember those who gave their lives in pursuit of that justice.

Today I think about all of those that lost their lives on September 11th, but I also think about those individual Seals and servicemen that gave their lives so I didn’t have to.

If you are enamored by what life is really like as a Navy Seal and want to pay tribute to those that were not so fortunate in this war, please go buy the book Lone Survivor. Any proceeds made from this post will be donated to the Lone Survivor Foundation.

Below are the names of those lost their lives during the operation (courtesy of Wikipedia).

It will be fun to watch DAO disrupt all types of institutions.

1/ The Rise of the Intelligent Punk

I've been chatting with the team over at @real_alethea over the last few weeks, and got a sneak preview into what they're doing, and I must say, it's pretty incredible. Watch the video below to see for yourself:

.@tula is furthering its commitments to promoting body positivity, empowerment and pushing beauty industry standards with its #EmbraceYourSkin initiative. https://bit.ly/3dVd0CX

That slippery slope led to the #Holocaust.

We say never forget because history has a history of repeating itself.

April 15, 1945, Lieutenant John Randall, then a 24-year-old SAS officer, was on a reconnaissance mission in northern Germany. He and his driver were heading down the road to Lüneberg when he noticed a large, 2

Tune in April 8 @ 1pm ET as @britton (Troops), sits down with @Jenny_Iggy (@gonimbly) to discuss the cost of information silos and the role #RevOps plays in breaking them down.

This take is so frustrating. These companies are investing their free cash flow in growth. This means hiring people + investing in innovation.